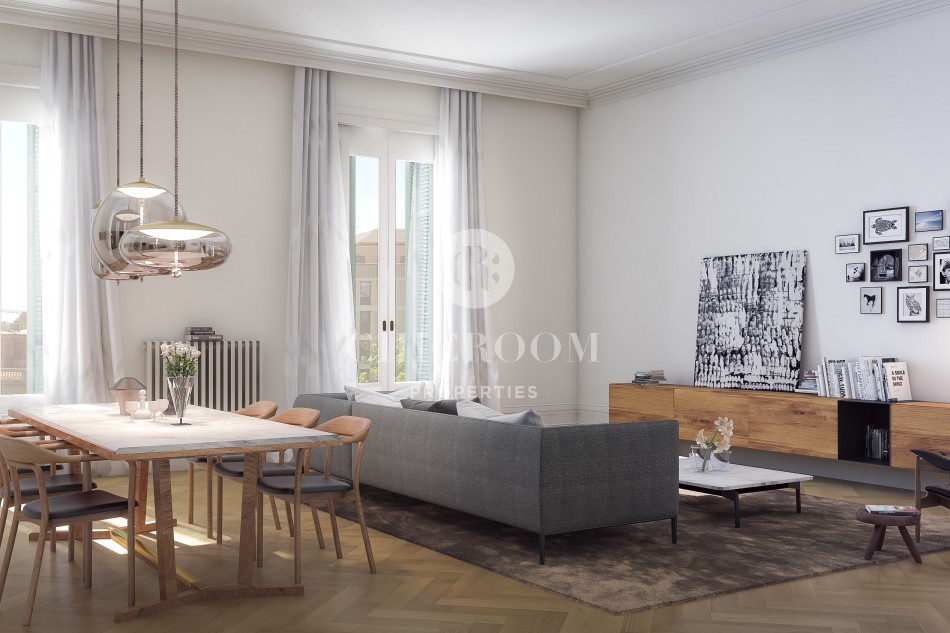 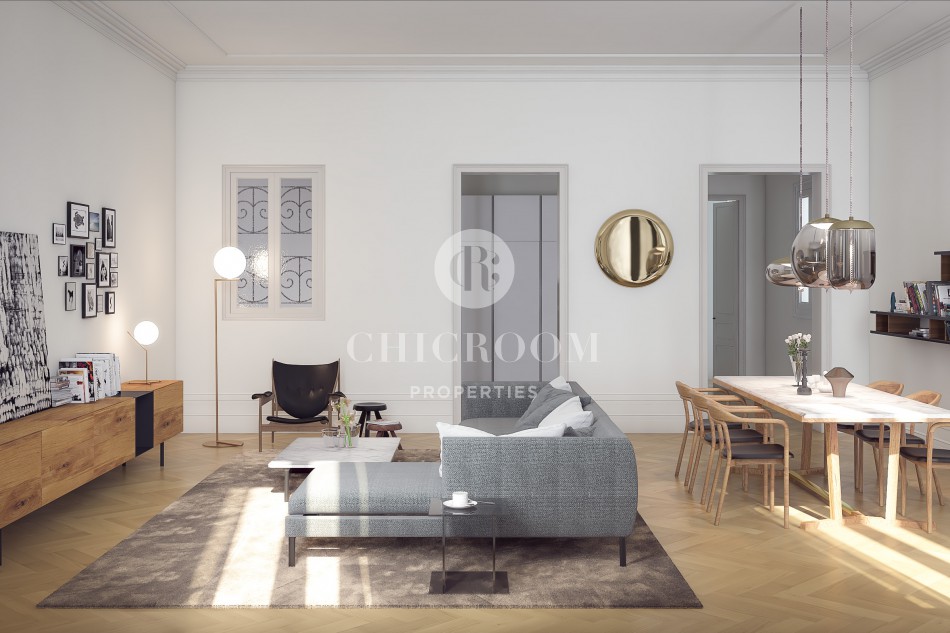 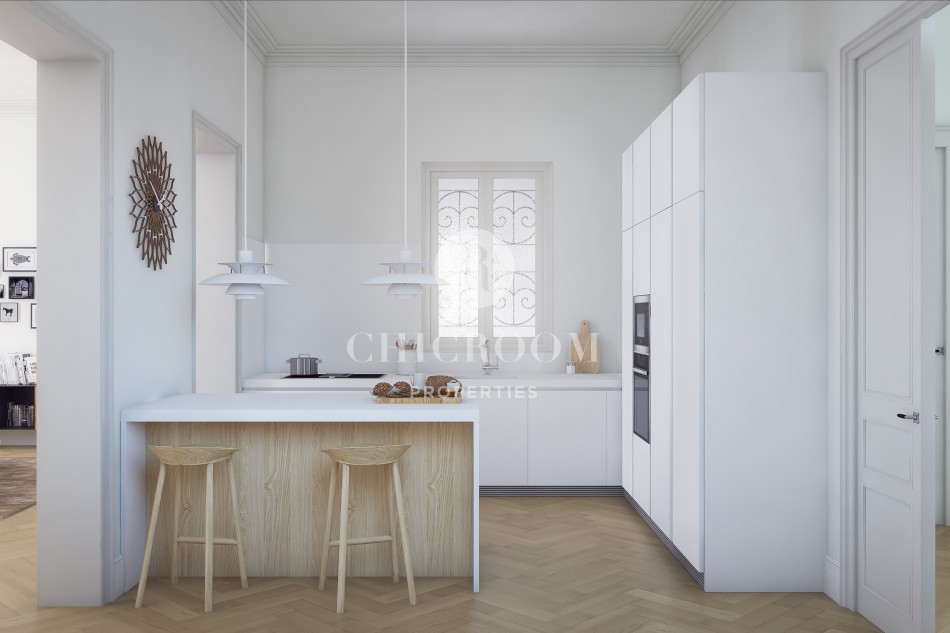 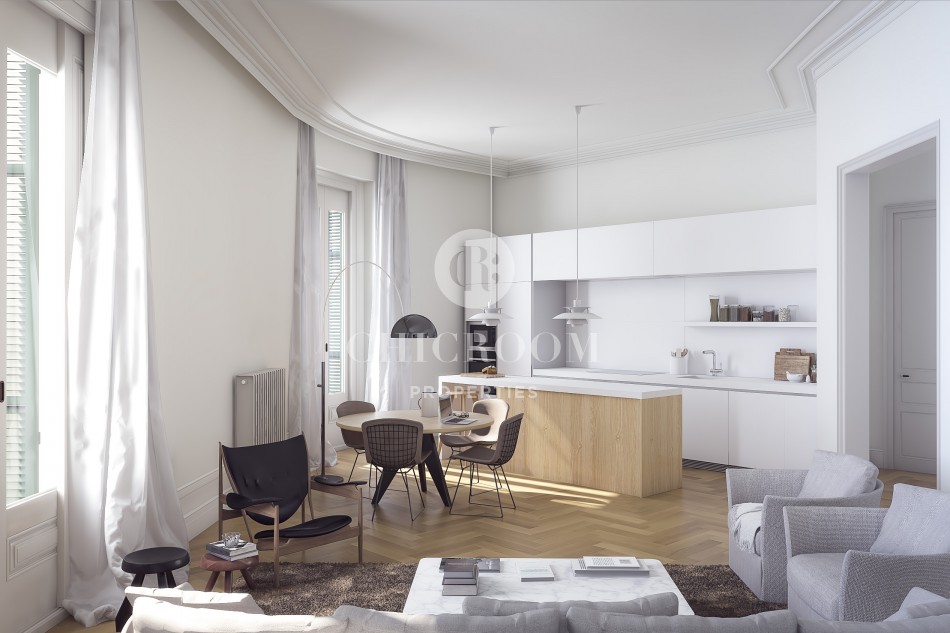 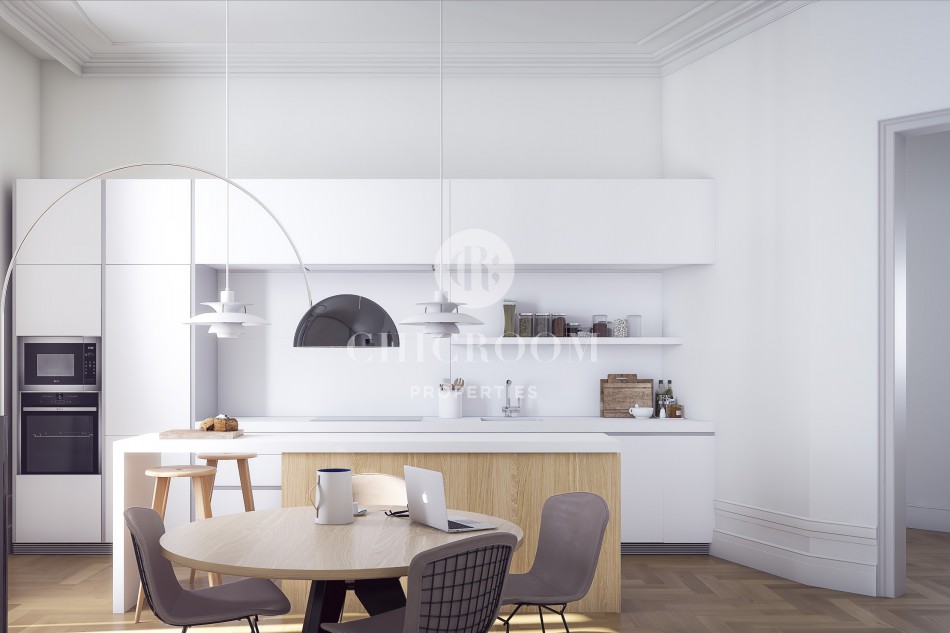 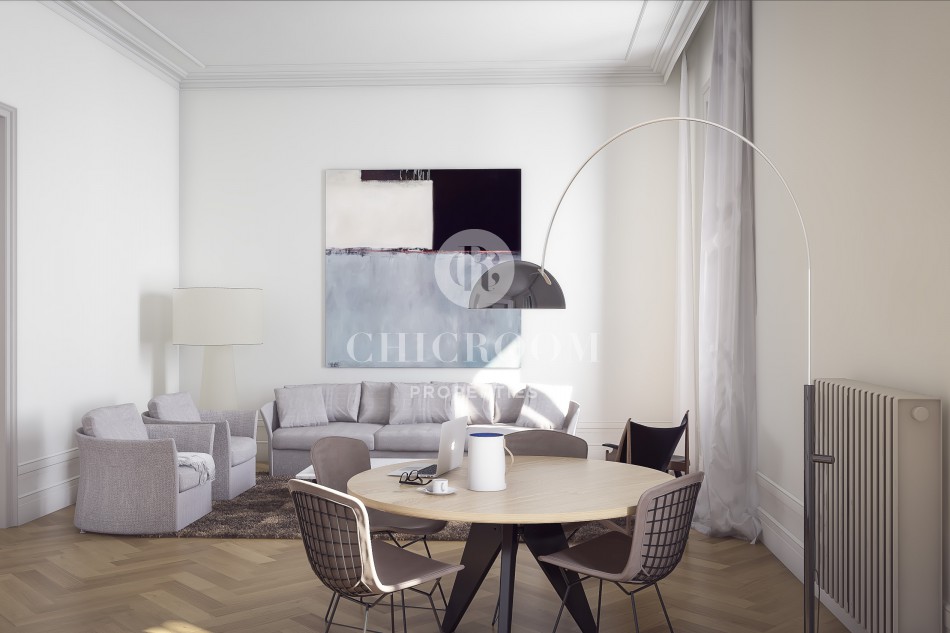 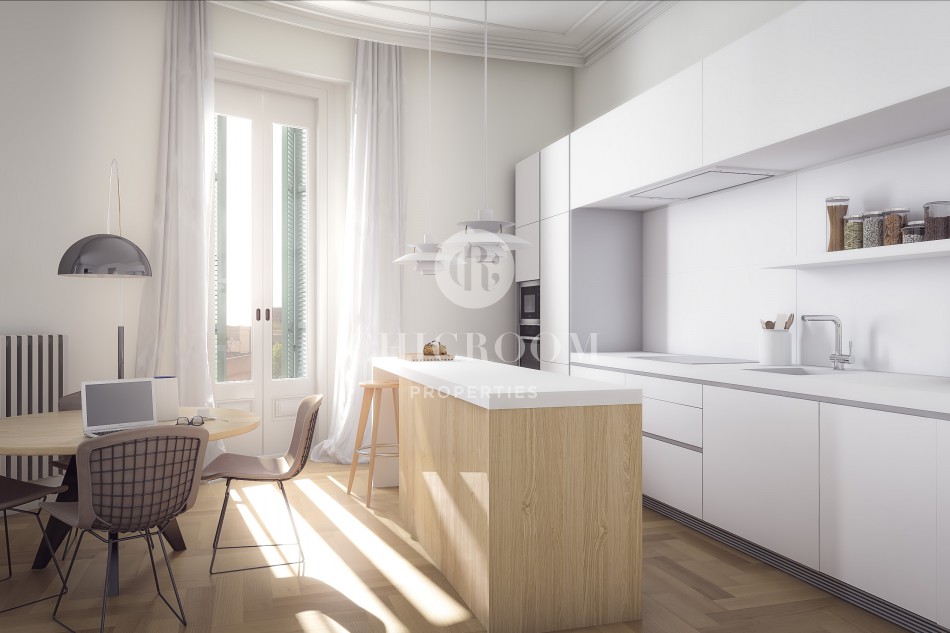 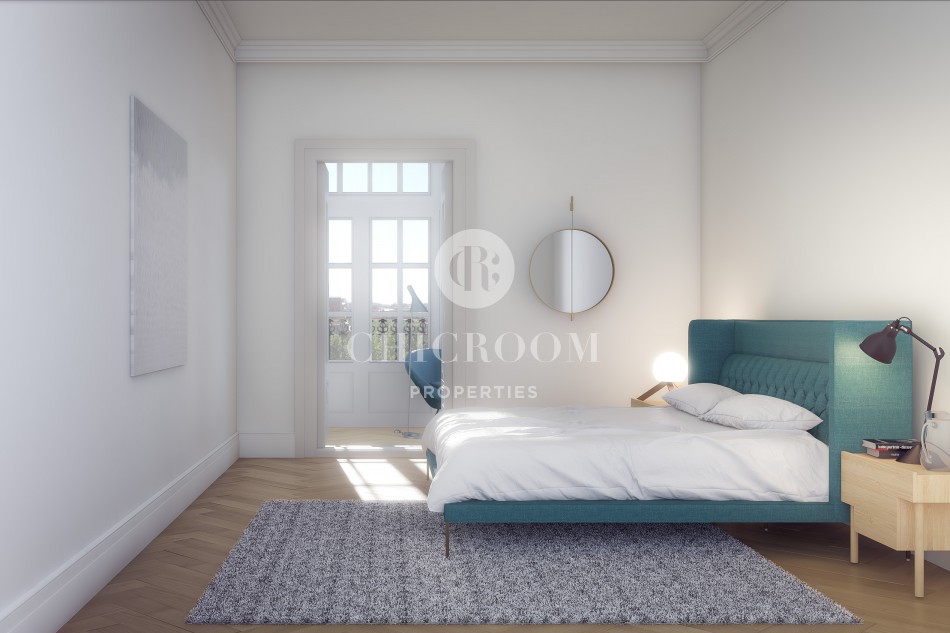 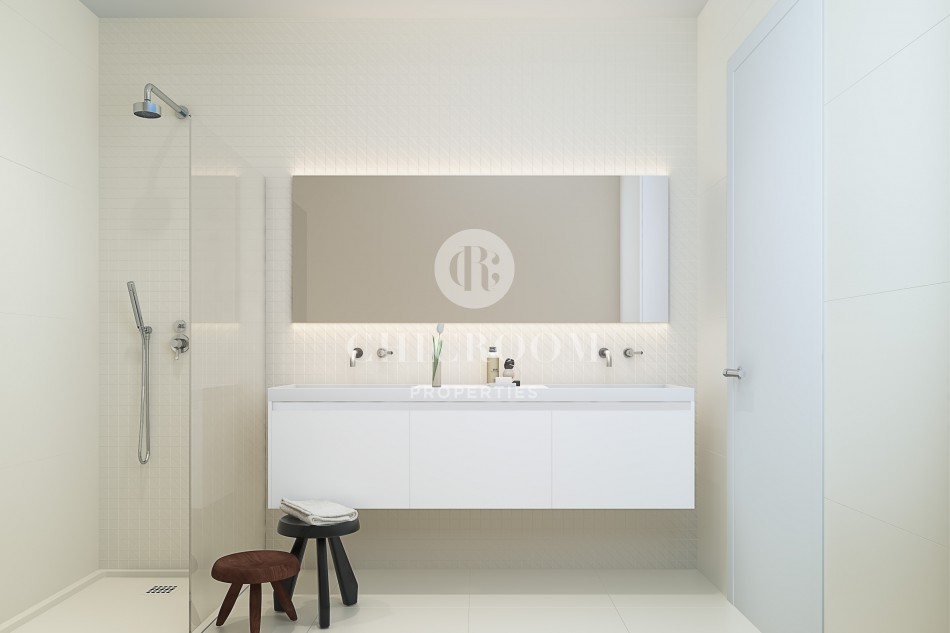 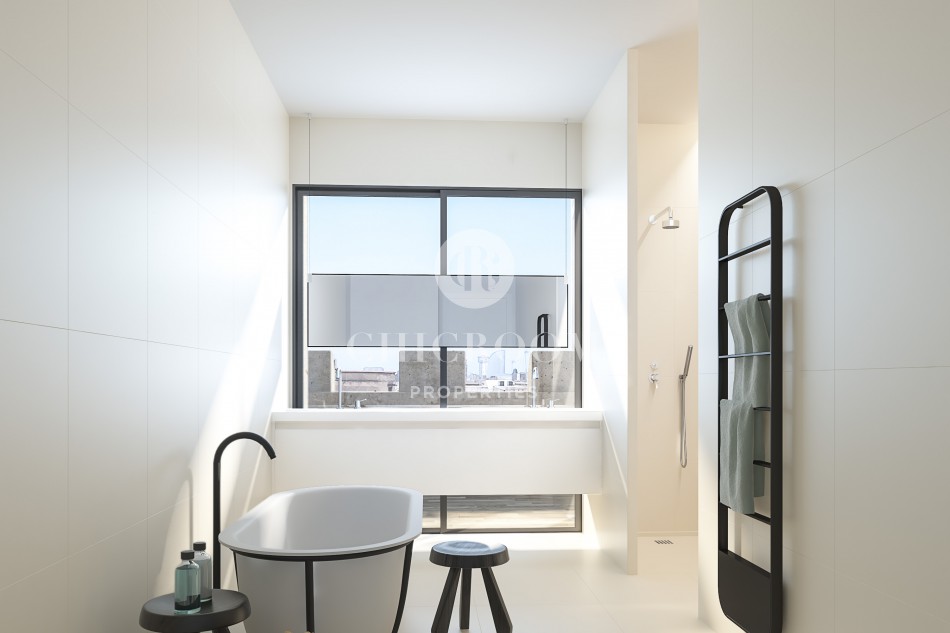 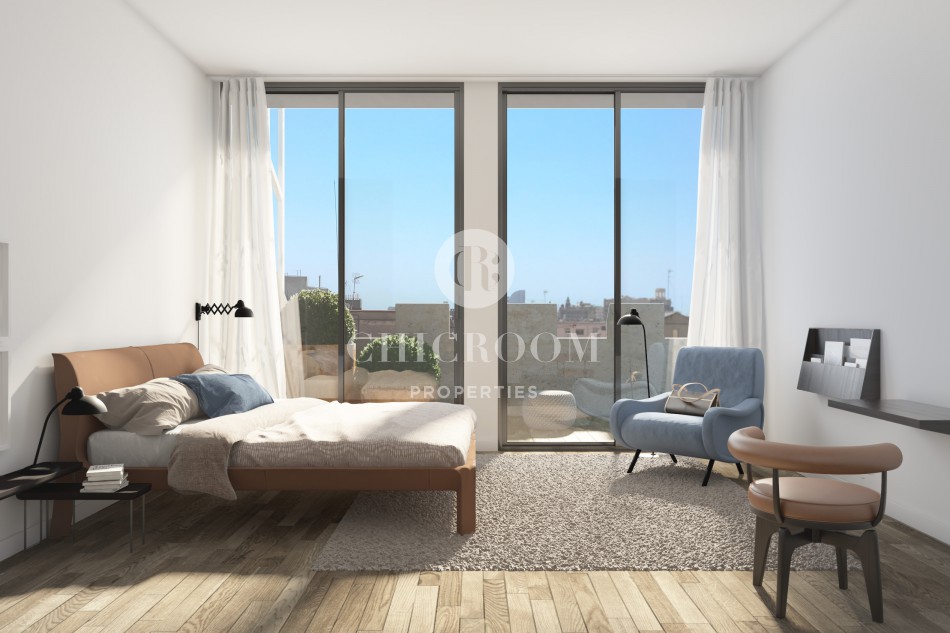 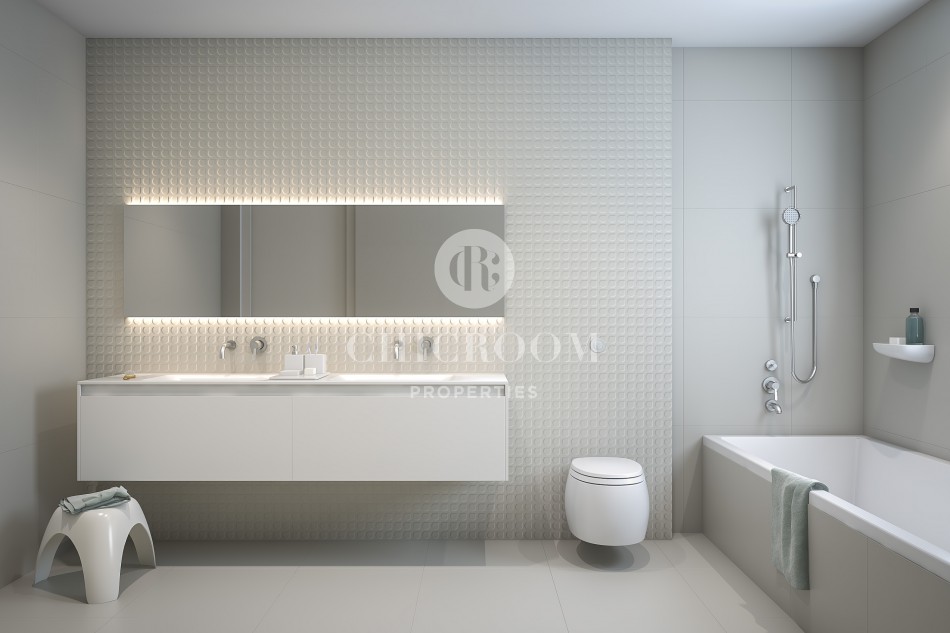 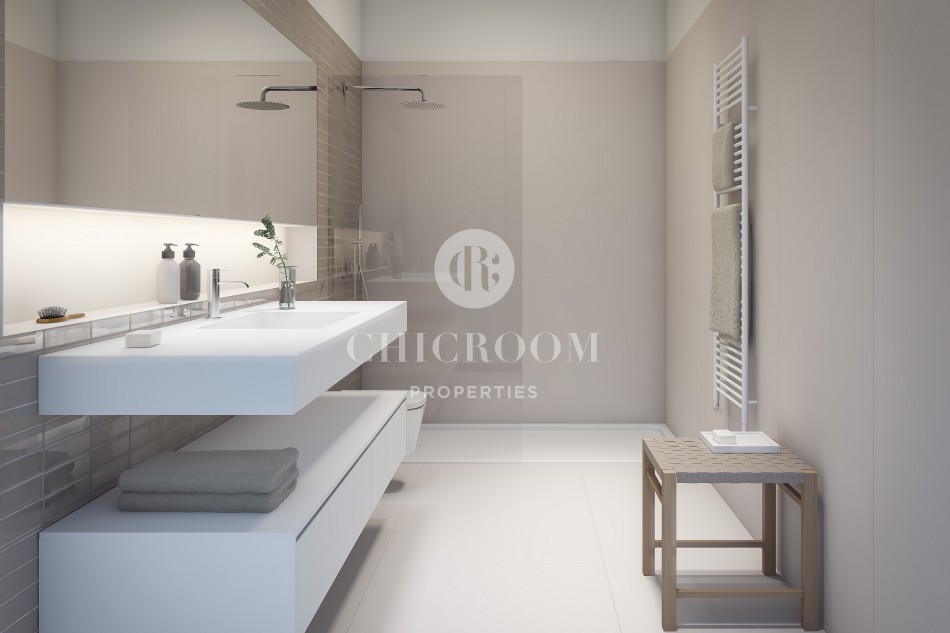 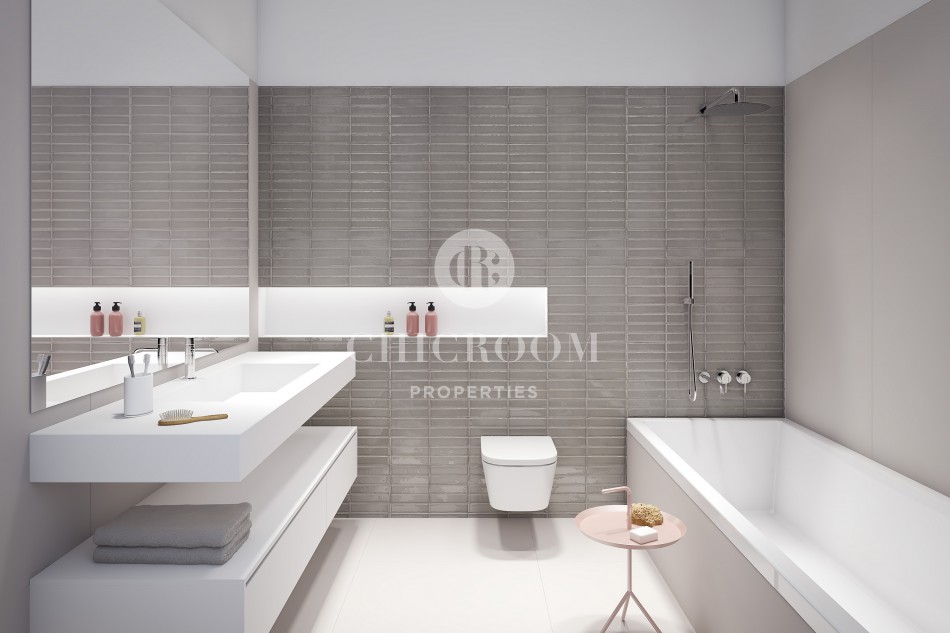 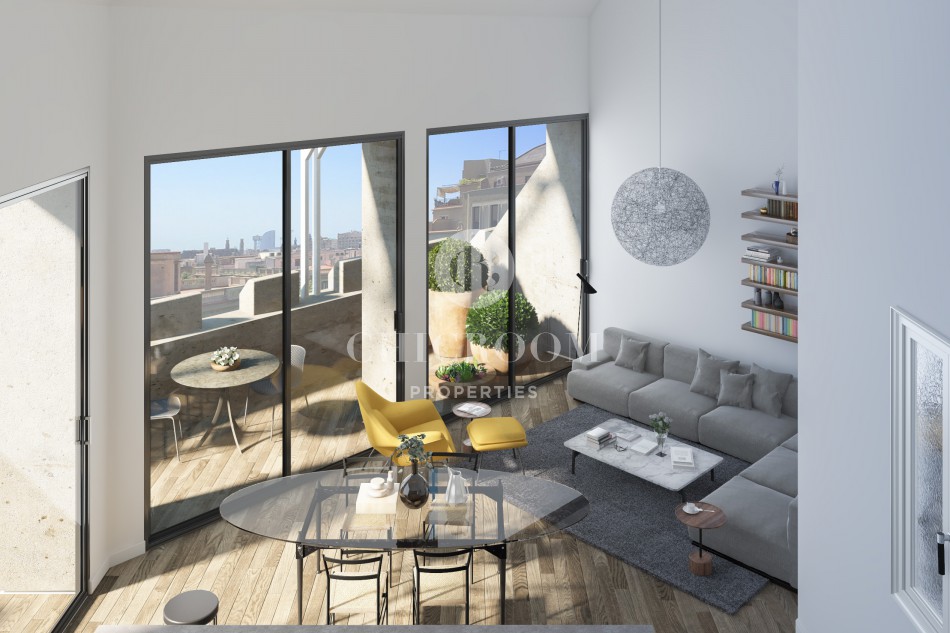 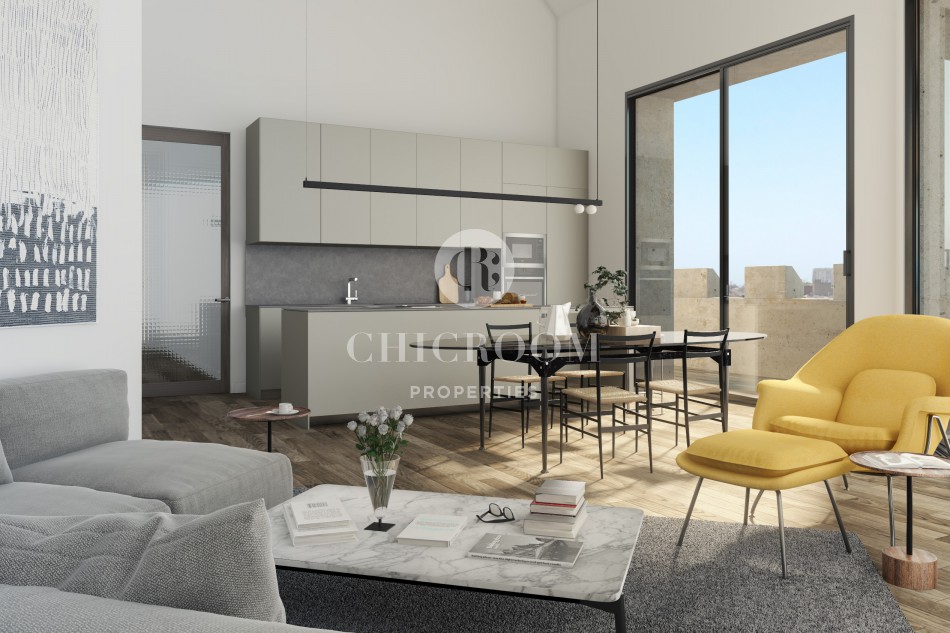 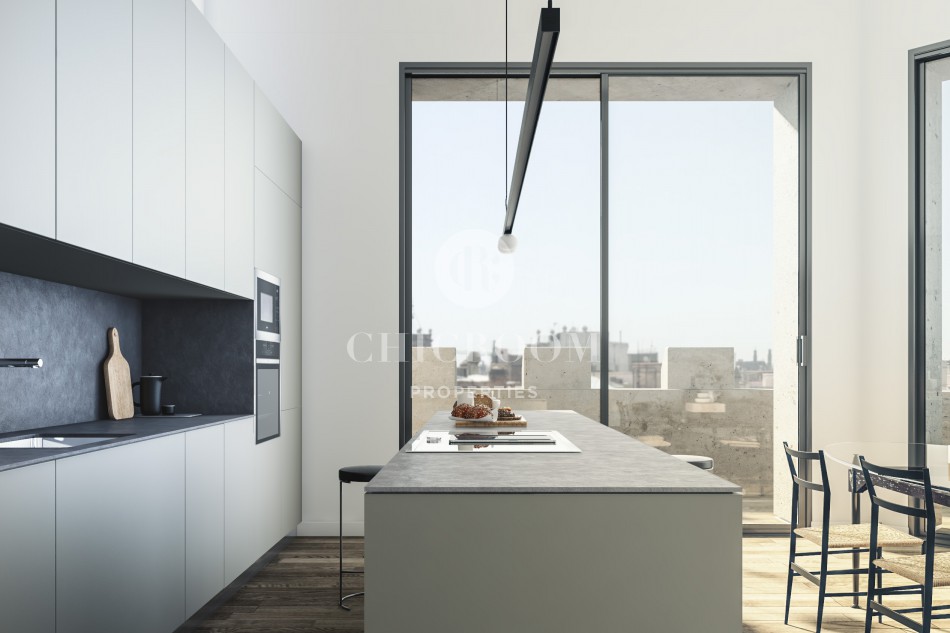 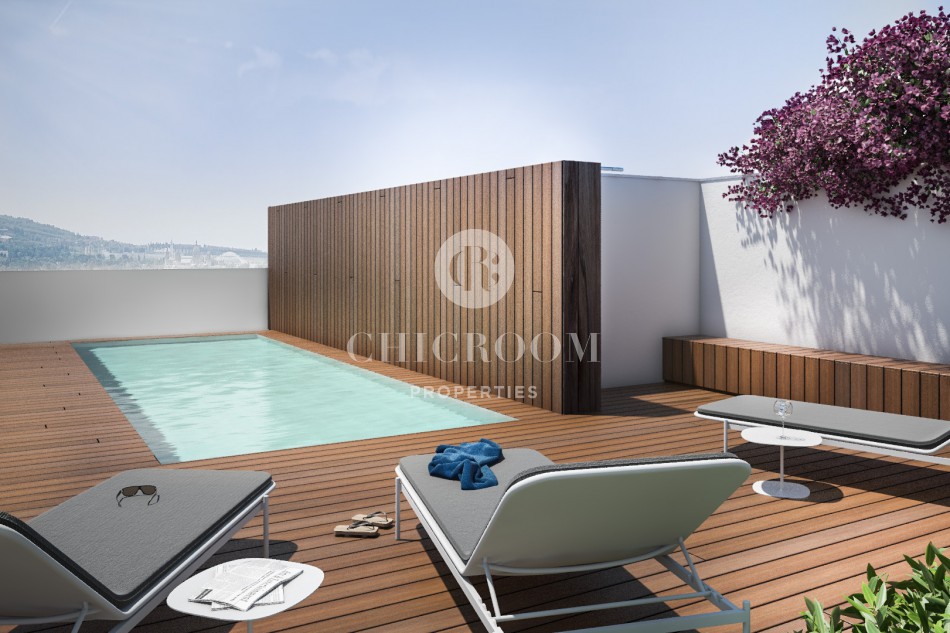 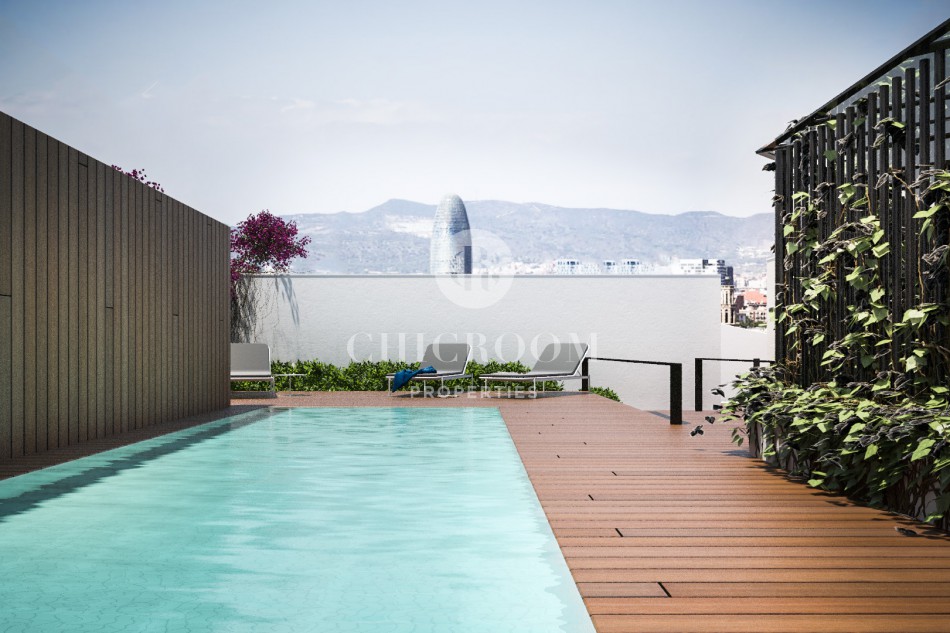 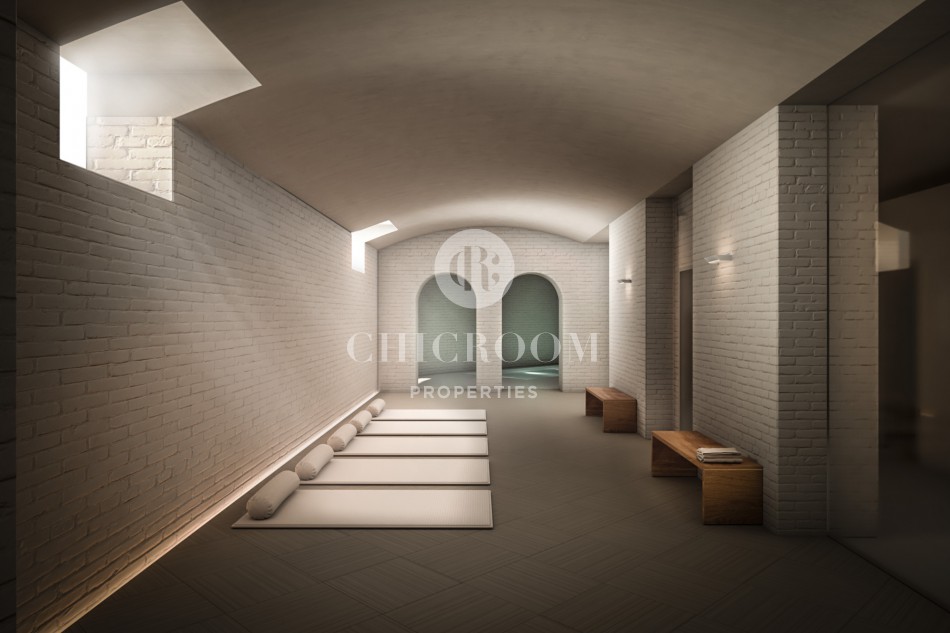 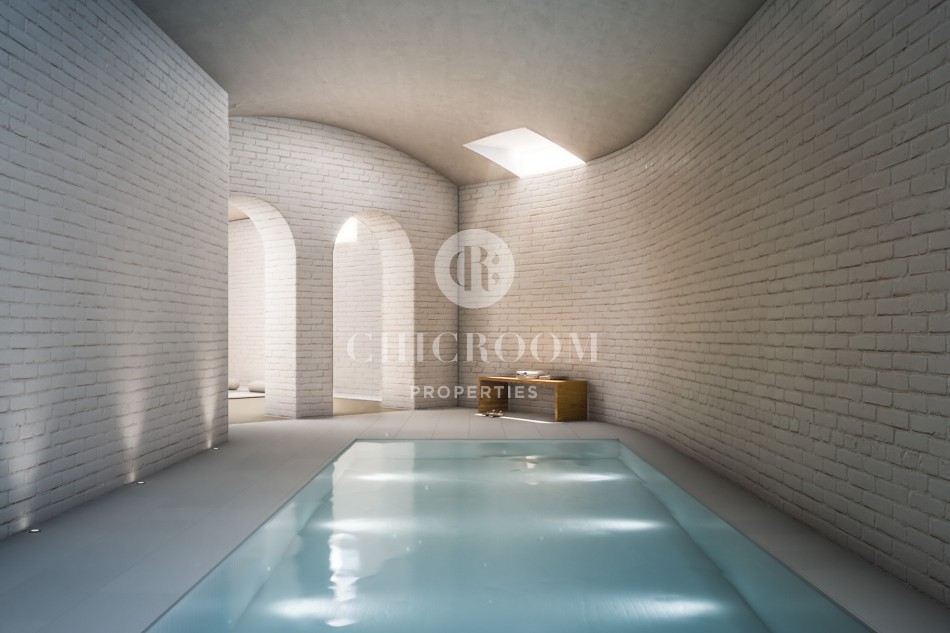 Living in apartments for sale in new development in Barcelona centre in an elegant classical building in the Eixample district, in a bright and sunny house, with a size and distribution according to the current lifestyle, equipped with all comforts, is at your fingertips.

These apartments reinterpret the traditionally modern essence of the Eixample in 16 exclusive rehabilitated dwellings and 3 magnificent penthouses of new construction.

Like all the great buildings of the time, the Casa Enric i Victorià de la Riva receives its name from its first owners, who entrusted the work of Enric Sagnier, one of the great architects of Catalan Modernism. Built between 1897 and 1899, its sun-facing façade stands out for the elegant grandstand on the main floor and the singular rounded tower, culminated by a beautiful dome. Two architectural elements that give it character.

Such unique buildings enclose their true essence beyond their walls. The rehabilitation and renovation project includes an exquisite reinterpretation of the space to adapt it to the needs of today, preserving the most characteristic elements of the era in which it was built. Getting the new interior of the houses to speak the same language as its historic façade is one of the great values ​​of the work.

The real luxury of homes is their exclusivity. Only sixteen owners will have the privilege of living in the four original floors, in a sober and functional modernist dwelling, restored with features and finishes that are in agreement with today's life. And only three will be able to do it in one of the magnificent penthouses of new construction at the very top that will dominate the building.

An elegant stand, a beautifully worked stone balcony, a suggestive circular hall, a quiet inner gallery, each apartment has something special, that unique detail that win your heart and influence your choice. With different options of size, number of rooms and orientation, all of them stand out for an interior design with character, capable of transforming the essence of modernism into a proposal of the most current.

Light and space define the character of the apartments. Inspired by the original design of Sagnier, the new distribution of the interior space invites you to enjoy an unbeatable quality of life. With large and bright rooms, generous bathrooms and modern kitchens integrated into the living room that provide a space for collaboration and coexistence for the whole family.

Three magnificent penthouses of new construction, added in the decade of the 70's, occupy the space of the building's top. They offer the possibility of living in the Eixample in a new, large, bright and sunny, single-level penthouse with terrace at the living room’s level and with three or four rooms.

The recessed façade on the top floor gives the penthouses great privacy, inspiring a contemporary interior designed to enjoy the maximum light and space in each room.

Living there offers its owners the luxury of being able to enjoy two communal pools. One outdoors on the upper terrace, with solarium and garden area, and another one covered in the basement, next to the fully equipped gym. A real privilege: sunbathing, swimming and exercising without leaving home.

Unanimously recognised as one of his great merits, Sagnier always knew how to surround himself with the best professionals to carry out his projects. Following his example, only brands and suppliers that stand out for their excellence have been selected to shape the project. Each element, each material, each finishing has been chosen for its quality, functionality and good taste.

Genuinely Barcelona, ​​the Eixample is the district with the most personality in the city. An example of avant-garde urbanism with more than 150 years of history. Designed to widen Barcelona after the demolition of its walls in the mid-nineteenth century, the Cerdà Plan promoted the creation of a new urban space in which modernist architecture flourished as nowhere else. Streets of wide wooded sidewalks draw a great grid formed by large blocks of buildings. All of them with their corners cut diagonally forming one of the most characteristic elements of the Eixample: the chamfer.

This work occupies one of the best chamfers in the Eixample Dret, at the confluence of Girona and Ronda Sant Pere streets. Elegant refurbished buildings and shops in full transformation turn Girona Street into one of the new central axes of the neighborhood, making this an ideal location to enjoy the vibrant experience of living in the new fashionable area of ​​the city. Its unbeatable orientation guarantees sun all the year and a great luminosity in the interior of the dwellings.

Small everyday privileges such as having a coffee, going shopping, choosing a restaurant, walking and being surprised by new shops and places of life, knowing that everything is next to home, make the lifestyle of this area of the Eixample be more and more appreciated. Its proximity to the narrow and always lively streets of El Born district is also part of its appeal. Just 500 meters from Plaça Catalunya, living in this building is living in the heart of Barcelona. Near Passeig de Gràcia and Las Ramblas, the Palau de la Música and the Liceu, the Parc de la Ciutadella and the Port Vell. 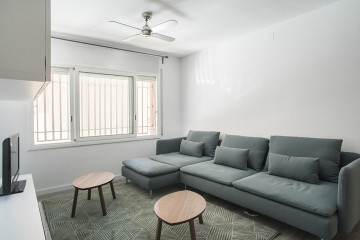 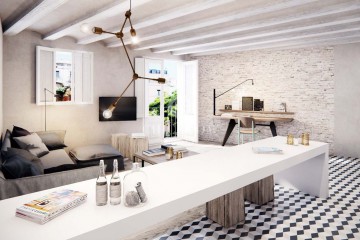 New development for sale in the Gothic quarter 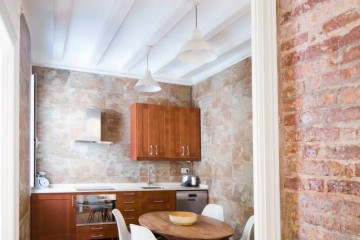 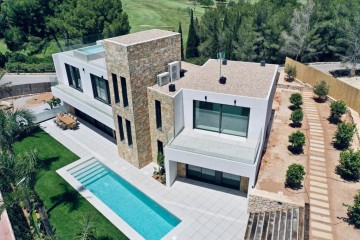 Modern and luxury house for sale in Roca Llisa, Ibiza 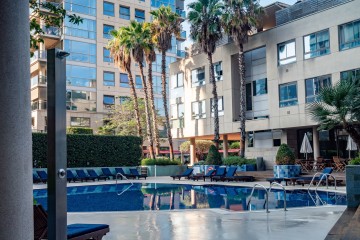 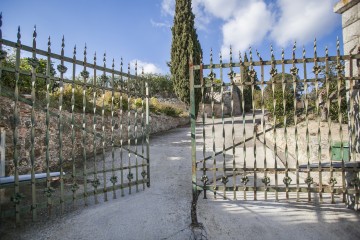 Wonderful Mansion for rent in Teia